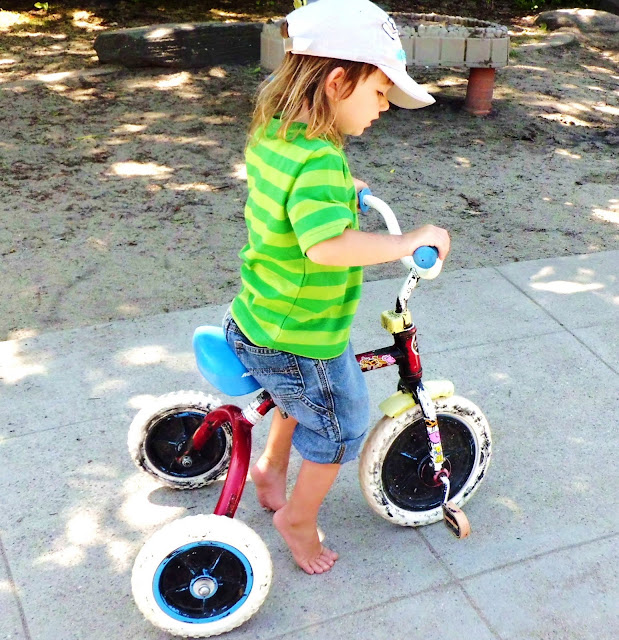 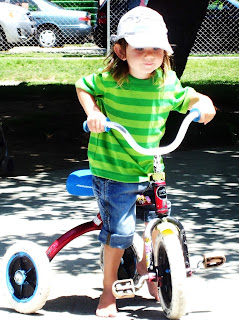 We met up with an old friend and her 2 year old daughter today, and it was just wonderful to see the two kids interacting so happily together. I almost wonder if they remembered each other even though it's been nearly a year since their last playdate. The fact that K kissed her full on the lips as we said good-bye might be a sign that he favors her company ;-)

These days, K doesn't do to well with kids his own age. I'm not really sure what the hang-up is, but it really seems as though he just can't stand to deal with his own age group. Is that a real thing?

He's SO happy to play with older boys and girls, and all the little sharing issues, and squabbles over who can do what with what that manifest themselves among his peers seem to disappear the moment he finds an older child to play with. He actively engages the older children (ages 4-6) in games of chase and tag, and he'll happily play the role of a baby for the older girls who want to play 'house'. It's super cute, but also a little odd.

I think his preference is so strong towards older children because they lack the 'hovering' parent. They tend to run wild over the playgrounds and engage in imaginative play that doesn't have room for a shadowing adult. So, maybe they seem more free and fun? His age group always seems to be encumbered by an anxious caretaker who steps in the moment one child seems displeased with another. It's frustrating to watch because I, obviously, hold the stance that children (especially those in, roughly, the same age group!) are nine times out of ten, perfectly capable of working out their differences without the assistance of an adult. But, it seems that's a minority viewpoint.

Of course, I might feel differently if my kid didn't know HOW to stand up for himself! A vital skill that is seemingly crushed by mainstream parenting. When did speaking your own mind, and refusing to allow another child to take a thing physically from your hand become punishable behavior! Why do we think that children will learn to share and work together peacefully if they are never allowed the opportunity to discover the benefits of these interactions themselves...and PARTICULARLY in comparison with anti-sharing and fighting...something that's simply not allowed for most children.
Posted by Lyndz at 10:05 PM