A Disappointing Introduction to Birth 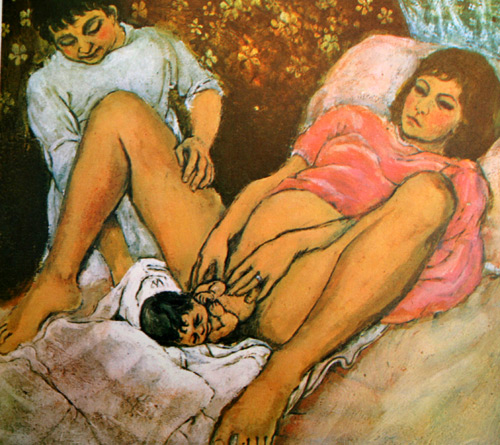 K has a little jeep and trailer that, lately, he's been using to cart around Thomas the Train. His imagination has ramped up in the past few months, and he often plays with this particular jeep while narrating some fantastic little scenario. (loudly...because nothing K does is ever quiet) Which, is all very cute  and disarming until he began to narrates something about 'going to the doctor'.


*SHOCK!* (Actually, it was more like total stunned silence while I stared at K with complete and utter disbelief...did that REALLY just come out of MY kid?)

I think I actually had to grit my teeth to refrain from saying something bad.

So, after talking a bit more about it, and digging into WHY exactly he thought one need go to a doctor to get a baby, it turned out that the whole concept stemmed from the movie, Babies.

Seriously...THAT movie convinced my kid that we need doctors in order to bring home babies.

*sigh* He liked the Mongolian birth scene because it involved the woman and bundled newborn riding home from the hospital on a motorcycle. Cool right?

It's not that I've kept any information surrounding birth 'secret' from K, it's just that he's TWO. So, his exposure is along the lines of Big Belly+_____=Baby. Apparently, the blank has now been satisfied by 'doctor' because it all involves the use of an awesomely loud motorcycle.

This is all very alarming to me because it's just not how I or N view birth. I don't believe that birth has any place inside a medical establishment outside of life-threatening emergency situations. I think it's a natural bodily process that does not require the 'assistance' of a doctor. (outside of a few emergency situations)

This is the exposure I want my son to have. It's sad to think that showing him one beautiful movie has already presented birth to him in a way that is just false.

I'm sure his view of things will change as he grows older and his exposure increases, but for now, I'm on the hunt for any and all picture books that illustrate homebirth...or midwifery...or doula work. Any suggestions?
Posted by Lyndz at 8:14 PM